Dear Triple Crown Survivors 2014, Congratulation and thank you so much for participating in the three races! Our field was definitely smaller than in the past years but it did not lack of talent, spirits and enthusiasm. The final results are posted here with a few pictures. Transports , our local running store and Hokka sponsored the event. The top first runner in each cup received a free pair of Hokka trail shoes. Second and third runners received a Transports gift certificate. Starting with our senior categories, in the Ruth Anderson Cup, Nancy Simmons not only won the Ruth Anderson Cup but she also was the fastest female of the whole women Triple crown competition and was 7th overall of all the Triple Crown participants. Sharlet Gilbert, a familiar figure in the East Bay is so tough that to make the Triple Crown more challenging, she ran Double Dipsea the day before Woodminster race! Of course she won her age group for both races. Our third Ruth Anderson runner is Laura McCreery , who has participated in at least 5 Triple Crown. Thank you Laura for believing in the Triple Crown! The winner of the Joe King cup Scott Strait flew down Palos Colorado, followed by our dear Pamakids friend John Spriggs and LMJS teammate Ruben Ramirez, the three of them finished in the top ten in the overall competition. Our open female winner was Beth Vitalis who returned to our races after several years of running ultras! Our second and third female runners were Ellen Clark and Jamie Barnhart, we hope they will come back next year. Our top three speedy male runners in the Open division were Richie Ledonne, Noah Beyeler and Chris Wendt. Richie also runs with Strawberry Canyon running club and you can be fitted for shoes by Noah and Chris at Transports. Those three young men ran Woodminster race in less than one hour!!!! 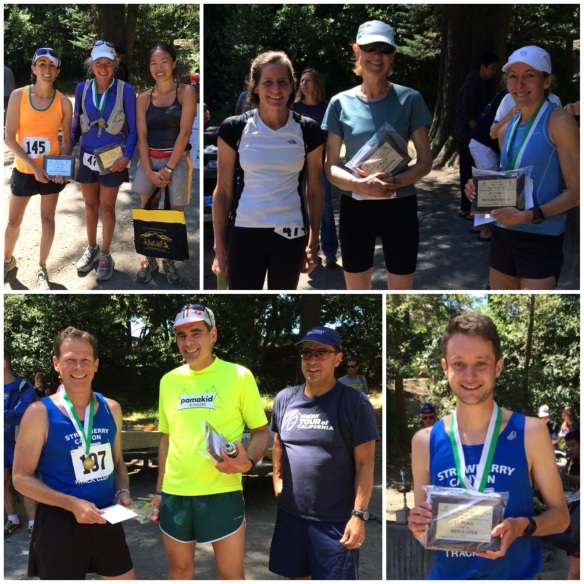 Please come back next year and tell your friends how much fun it is to run our three local East Bay races. Many thanks to LMJS club members for all their help during Tilden Tough Ten and Woodminster Race. Also it is always a pleasure to reconnect with the Castro Valley Track club at the Chabot trail challenge. We would like to recognize our race directors, Kate Stewart (Tilden Tough Ten, LMJS), Juli Chouinard (Lake Chabot trail challenge, Castro Valley Club) and Gareth Fong (Dick Houston Memorial Woodminster Cross-Country, LMJS), they spend so many hours and so much energy organizing their races and are all smiles at the finish line!